Getting to Know Our Urban Wildlife

Many questions come to mind when you hear about coyotes in New York City.  Where do they live? How many are there? What do they eat? Why are they here? Should they be here? We aim to address many of these questions both in NYC and in the larger metropolitan region. Just as importantly, working with students and educators, we will work to get the word out there on what we are learning.
﻿Where the urban wild things are
"No sleep til Brooklyn": Coyote colonization of Long Island
What coyote DNA can tell us
The story scat can tell
Coyote4Science: How studying road kill coyotes can help us help coyotes 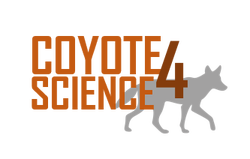 ​Prior to 2014, the only evidence of coyotes on the landmass of Long Island (which includes Brooklyn and Queens), came from a few photographs. But, in July of that year, a coyote was killed by a car in Queens, providing our first piece of physical evidence of the animal’s presence there. This information helps our current research on coyote movement across our city, including identifying hotspots of road mortality. If there are areas where coyotes are more likely to be hit, knowing this might lead to interventions that can ultimately reduce coyote road mortality.

This poor Queens coyote is now part of the American Museum of Natural History’s vast scientific collection, a library of life used by researchers to better understand the biological diversity of our planet. By providing a permanent home for roadkill coyotes, we are also creating a record – genetic and morphological – of New York City and Long Island’s very new coyote population.  Many years from now, this library of deceased coyotes can be used by future scientists and students to  understand how the coyote population has changed over time, and to answer new questions we can only imagine for now.  If you think you have seen a dead coyote, please email us coyote4science@gmail.com with a detailed location, contact information, and a picture if possible.  Do not pick it up. Handling wildlife – even roadkill – is illegal in New York State.
Humans: Friend or Foe?
"They’re New Yorkers, too!," is the tagline from NYCWildlife referring to the over 600 species of animals that  live in NYC . The campaign is aimed at getting human New Yorkers more familiar with urban wildlife. That leaves the question, "Just what do New Yorkers  think about their Gotham coyote? "

To answer this, we are gathering information from people who live close to areas with frequent urban coyote sightings, such as Riverdale Park and Pelham Bay Park. Starting in fall of 2016, we will be conducting surveys and interviews with local residents about these animals. This research will allow us to see what humans think of these urban coyotes- if they feel threatened, if they think these animals are interesting, or if they just really don’t mind! This will help us know how people might react to a coyote if they ever come across one. Information about what humans think of wildlife helps to protect both wildlife and humans.

If you see us out in the parks, come say hi! We’d love to know what you think about your coyote neighbors!