Nearly all GCP's partner organizations have their own student mentorship programs, ranging from high school through graduate school. Below you can meet some of our past and current students in a few of our partners' respective programs. 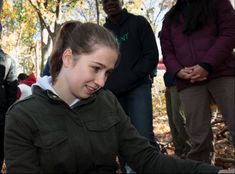 Project: Using count (N-mixture) models to model habitat and socioeconomic factors as predictors of coyote site use in NYC
Project Status: Completed
Project Description:
Coyotes have now colonized several parks in the borough of the Bronx, the only mainland portion of NYC, and are poised to make their way onto Long Island. Researchers and managers are interested in finding patterns of habitat use that could be used to predict where coyotes will ultimately flourish in NYC and, eventually, Long Island. However, prior habitat modeling on the NYC population has failed to find any meaningful habitat-site occupancy patterns based on detection/nondetection data from camera traps. In this study, I analyzed the relationship between coyote photographs and potential habitat and socioeconomic explanatory variables using count based (N-mixture) models, where the number of coyote observations from a camera in a 4-week period was considered a discrete count. In this case, rather than estimating abundance, lambda was interpreted as an index of site use or use intensity and might provide a more granular measure of habitat suitability.  Habitat and geographic variables I tested were canopy cover, forest, patch size, and total habitat Socioeconomic variables included vacancy, population density, housing density, and mean income. I also included two categorical variables: “season” (pup-rearing” or “non-pup-rearing”) and “Bronx”. Overdispersion and variability of counts within and among sites were all high (c-hat = 1.55) leading to a wide range of site-specific detection histories without any clear correlations between estimated detection rate and any of the predictor variables. For use intensity, there was a strong positive correlation between use and  the “Bronx” variable, where Bronx sites had much higher predicted use scores. Also, winter had higher use scores than summer overall. Model-averaged predictions indicated that of the sites tested, both the Bronx and Queens had suitable environments, and coyote use intensity depended primarily on accessibility on a landscape scale and not individual site quality.

Project: Activity patterns of mammals in Bronx, NY Parks vs. Mianus River Gorge Preserve, Bedford, NY.
Project Status: Completed
Project Description:
Urban environments can alter the behavior of animals in a myriad of ways. In this study, the effects that urban environments have on the temporal activity patterns of animals were evaluated, comparing an urban environment to a more exurban area. XX motion activated “camera traps” were deployed in XX parks the Bronx borough of New York City and at the Mianus River Gorge Preserve in Bedford, New York. Using equipped with a scented bait, sightings of each animal common to both areas were recorded and classified based on species into Camelot, an online database. From there the data  were entered into the software R, and was displayed as kernel density plots using the package “overlap”, where it was evaluated to determine the differences between the two different areas. The animals I investigated were coyotes (Canis latrans), white-tailed deer (Odocoileus virginianus), Northern Raccoons (Procyon lotor), eastern cottontails (Sylvilagus floridanus), and Virginia opossums (Didelphis virginiana). Coyotes and white-tailed deer were generally crepuscular mammals, but were more active at dusk in the urban setting and active at dawn in the exurban setting. However, this trend was flipped for the raccoon, which was most active at dawn in the city. Eastern cottontails were mostly nocturnal in their natural setting, but displayed crepuscular habits in the urban setting. Lastly, the Virginia opossum displayed a similar pattern of activity in both settings. There are a number of factors that could have influenced these changes in activity such as human interaction, interactions with the other species, changes in food source, which creates a need for further research to fully examine the effects that cities have on animal populations. 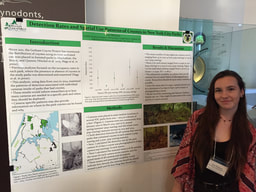 Project: Variability in Detection of Coyotes in New York City Parks and Implications for Research
Project Status: Completed
Project Description:
Since 2012, camera traps have been deployed in 10 parks in New York City to study the occupancy dynamics of Canis latrans (eastern coyotes) in an urban center.  Previous work has examined coyote site occupancy at the scale of an entire park. The purpose of this study was to investigate detection rates on the scale of individual cameras within multiple occupied parks during the pup-rearing (April through September) and non-denning/pup-rearing (i.e., non-breeding; October through March) seasons.  Daily detection rates per camera were 0.05 ± 0.10 (mean ± SD) in the non-breeding season and 0.04 ± 0.07 in the breeding season, indicating that a single camera had approximately a 4 – 5% chance each day to detect a coyote in an occupied park.  The high variability in detection rates within parks indicates that certain cameras were more successful at detecting coyotes and thus coyotes use specific areas of the park more than others.  Ongoing analysis will examine what factors may determine these use patterns. Information on the within-park variability in detection among cameras can also help researchers plan future deployments and maximize the change of detecting coyotes with the minimum number of cameras. 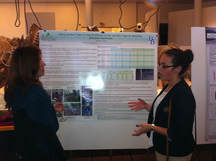 Project Description
Mammalian carnivores, such as the coyote (Canis latrans), are often difficult to monitor in the wild because of their secretive nature and low density.  Coyotes are rarely the target species for hair trap studies causing a lack in reliable methods for collecting coyote hair.  Cameras were used to catalogue the animals’ reactions to several different methods for collecting hair.  Different materials and lures were tested as well as the different methods.  Hair snares made of wooden blocks with Velcro, outdoors carpet, or outdoor carpet tape was tested first with fatty acid tablets.  A climber trap was tested with sardines and coyote urine powder.  Hair corrals were then set up with barbed wired blocks in the center.  Sardines, fatty acid tablets, coyote urine powder, and coyote urine spray were tested at various times in the corrals.  Traps were made putting cleaning brushes, pet brushes, and Velcro were placed between two pieces of hardware cloth with a chicken wing.  The traps were placed at different times and were checked every two to three weeks for hair and pictures. Overall, the hair traps did not work well.  If one wishes to attract and photograph raccoons, sardines are the best bait.  For coyotes, the use coyote urine powder or Fatty Acid Tablets were the most effective.  There was a high overlap between what worked for coyotes and what drew in raccoons, but the urine powder seemed to be more coyote-specific.  Information on the best coyote lures (urine powder and fatty acid pellets) will be useful for future camera surveys. 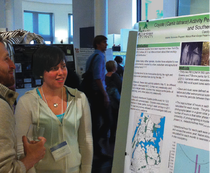 Wildlife Tech Class of 2014
Mamaroneck High School
Mentors: MRGP Staff, Suzanne Clemente (Pace University)
Project: Activity Period of Coyotes and Other Meso-Predators Along an Urban-Rural Gradient
Project Status: Completed
Project Description
From January 2012 to February 2013, Carolyn helped Gorge staff run camera traps in 16 parks and protected preserves in New York City (NYC) to investigate the distribution and activity patterns of Canis latrans (coyote) in the NYC metropolitan area.  Carolyn used these data to examine seasonal variations in park occupancy and diel variations in activity.  Coyotes were detected 538 times over the 13.5 month survey period and were found in all Bronx County parks surveyed at least part of the year.
Carolyn concluded that coyotes in NYC are primarily nocturnal and crepuscular, corroborating results of earlier studies on urban coyotes, likely due to avoidance of human activity.  Additionally, coyotes were found in fewer parks in the summer than in the fall and winter; this pattern suggests a range reduction around denning sites during the pup-rearing season.

Project Description
In 2011, camera trap arrays were placed in 14 parks across the 5 boroughs of New York City to document the distribution of coyote Canis latrans.  Cameras were placed in each park at a minimum density of 1 camera every 0.25km2 and parks were monitored for at least 6 weeks each from March to October.  Coyotes were detected in most of the parks in the Bronx (5 out of 6 parks) but only in one park on Long Island.  Family groups were detected in Pelham Bay Park, the largest park in the study.  Coyotes have colonized the majority of suitable sites in the Bronx but successful dispersal to non-mainland sites in Queens and Brooklyn seems limited.  However, we expect that coyotes will colonize sites in Queens, Brooklyn, and possibly Manhattan in the near future and managers should prepare for these events.  This is the first large-scale camera trapping survey and the first study of any kind to focus on coyotes in NYC.  We plan to continue monitoring parks in Queens, Brooklyn, and Manhattan to locate any new colonization/dispersal events and develop predictive models that will assist managers in determining how coyotes move through the urban matrix and what sites will likely be colonized.

Project Description
The expansion of coyotes into the northeastern US is a major challenge to wildlife managers, especially in urban and suburban areas where reports of human-coyote interaction are on the rise. Deborah was able to model the probability of observing a coyote on private property by surveying local families via elementary and middle schools in Westchester County.
Research Results
After collecting more than 1,500 responses, Deborah and MRGP staff developed a robust model that accurately predicted areas of the County where coyote observations would be most likely. Coyotes appear to be more readily observed in areas closer to forests and meadows and farther from moderate and high development. Click here to view Deborah's research poster presented at the 2008 Northeast Natural History Conference.

Deborah's work was ultimately published in the Journal of Wildlife Management in 2010
updates coming soon!